Ultimately, the staff of Houston Woman Magazine made the final selections from among those nominated. Each one of them was chosen because her sphere of influence was deemed “vast and powerful.”

Beverly Denver, editor and publisher of Houston Woman Magazine, said, “When the call for nominations went out, we had a number of people call or email and ask what exactly did we mean by ‘most influential.’ Many thought we were looking for the most successful women in town or the most well known, for example. We explained that in some cases all might apply, but being ‘most influential’ (in our opinion) was truly about something else. Simply put, we were looking for women whose actions or thoughts can change the actions or thoughts of others.”

Influential people are often charismatic individuals with a vast network of social and professional connections. Many times they also have earned an enviable reputation for an expertise in a particular area. Because of that, they are credible. This form of influence draws upon the notion of trust. The women selected this year fit all these descriptions,” said Denver.

“When you have a passion for your mission, wanting to bring it to the highest level of goodness for humanity, your energy will lead others to their own greatness, and you will have an inspiring occupation, not a job.  You will be a leader, and others will want to follow you” 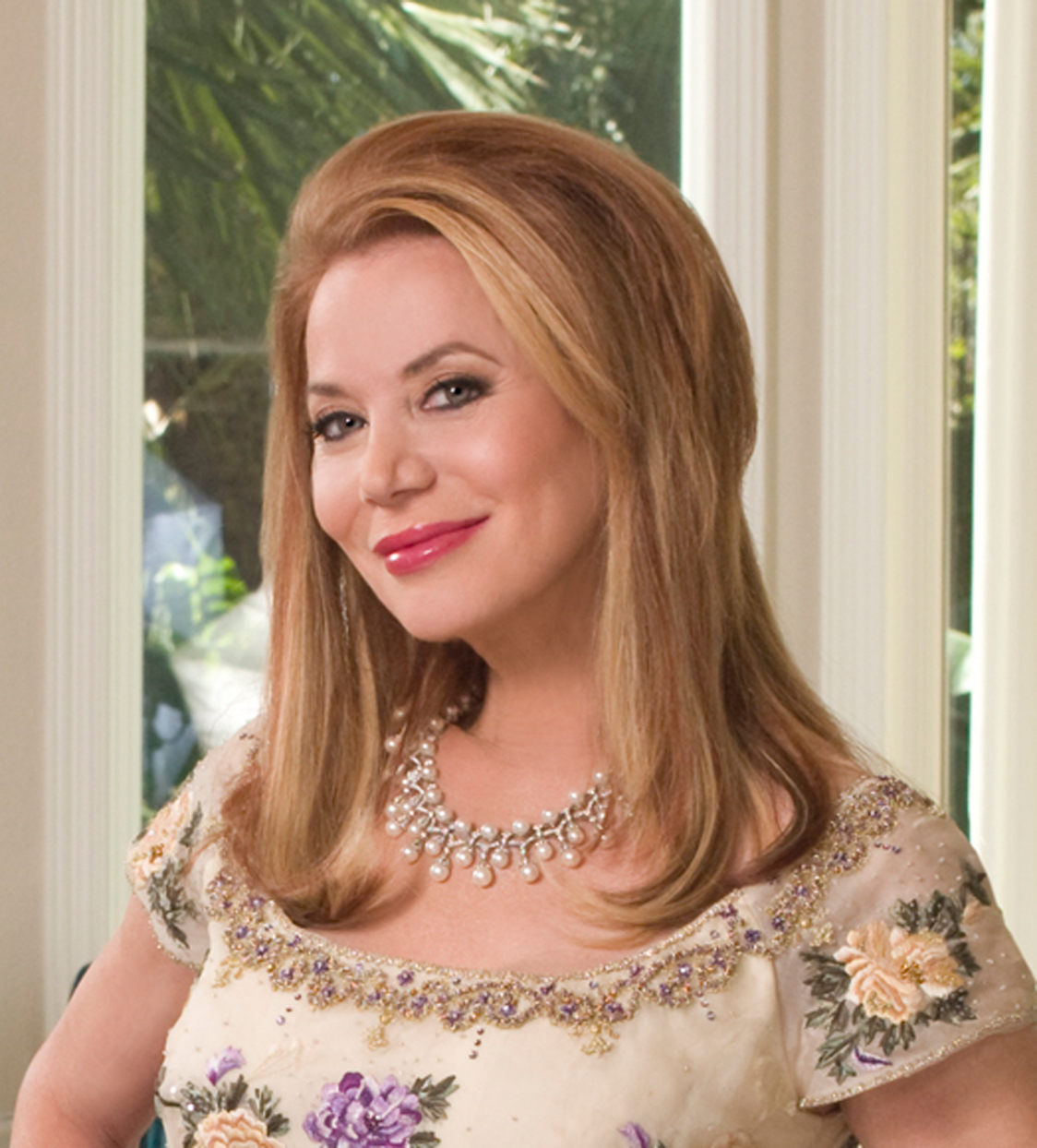 As soon as Cindi Harwood Rose could walk she could draw.  By the age of eight, others were asking her to make portraits of their children and pets–paying her in cookies and quarters.  At 15, she saw an ad in the Houston Post that noted Astroworld was looking for a cashier for the art concessions. Though she did not want to be a cashier, she quickly sketched her family’s faces and brought the drawings with her to the interview.  There, she was asked to draw the manager’s face in watercolors and pastels.  Although not familiar with these mediums, her work was great and she was hired as a portrait artist.

While taking a park tour, Rose saw and was intrigued by the silhouette artist from France and his ability to carve a profile freehand without a light or sketch.  Soon afterwards, Cindi was cutting silhouettes for herself.

Rose graduated from the University of Texas at Austin with high honors.  She majored in fine arts and journalism and received the award as the top student in the department of communications.  She earned her college degree while cutting silhouettes and doing volunteer work for the Austin State School.

Upon graduation Cindi went on to work at Disney World in Florida as the first silhouette artist, staying nine months.  Then, Astroworld came calling, asking Rose to take over all the art concessions.  Rose accepted the job, and at just 21, found herself with 40 employees.

Rose is married to Franklin A. Rose, MD, a board certified plastic surgeon in Houston.  They have two grown children, Erica and Benjamin.

In 2005, the couple founded the Holly Rose Ribbon Foundation to provide reconstructive surgery to uninsured post-cancer patients.  Thus far, the foundation has provided more than $1 million in free services.

Additionally, the foundation funds scholarships for those who have lost a parent to cancer.

Houston’s 50 Most Influential Women of 2013 were honored at an afternoon tea at the St. Regis Hotel on Sunday, January 12. At the private event, the 2013 honorees were the first to see Houston Woman Magazine’s special edition featuring each of them. 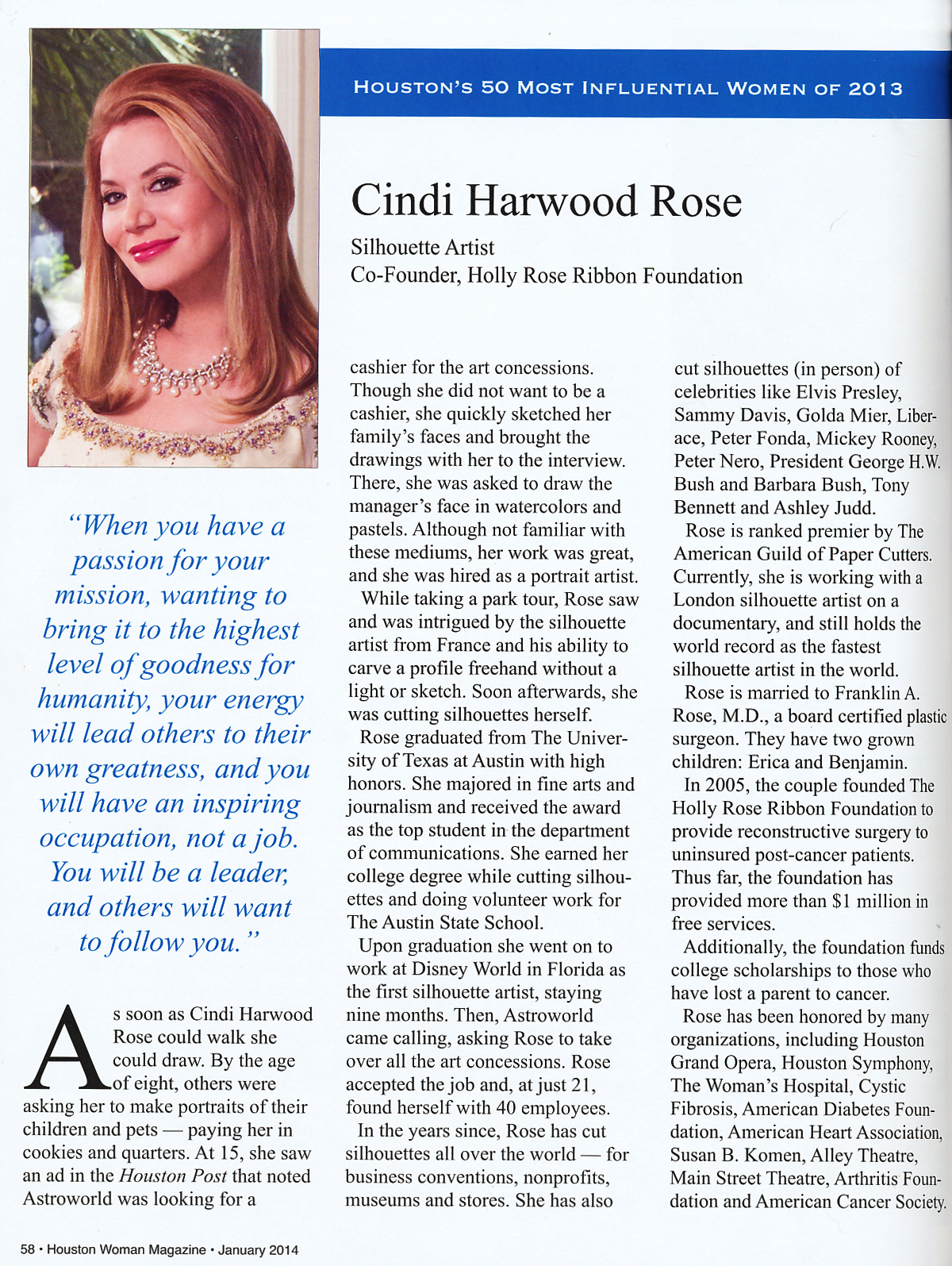 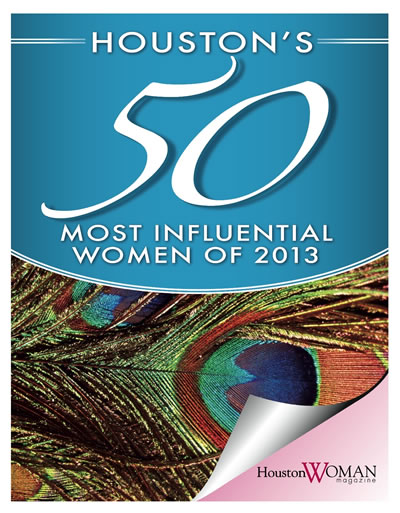