Bride Cancels Wedding Due To Harvey, Then Turns Banquet Into 300 Meals For Hurricane Victims – as featured on INSIDE EDITION http://www.insideedition.com/headlines/25307-hundreds-of-people-displaced-by-hurricane-harvey-fed-after-couple-postpones-wedding 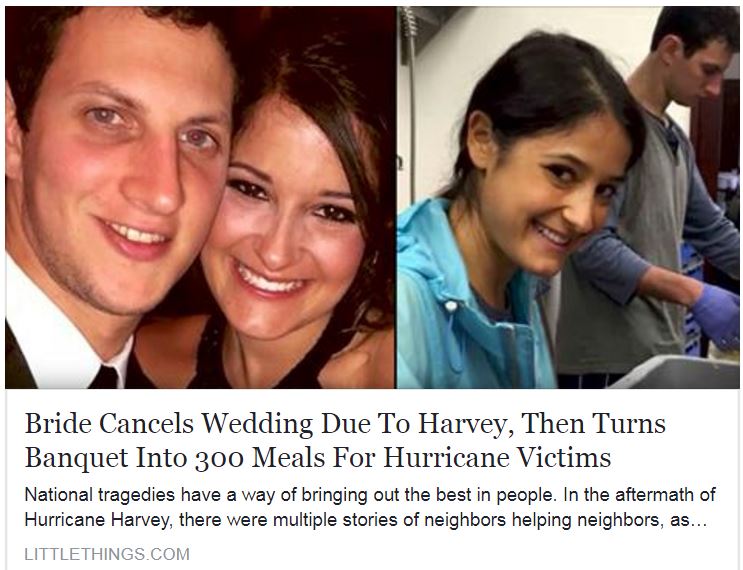 National tragedies have a way of bringing out the best in people. In the aftermath of Hurricane Harvey, there were multiple stories of neighbors helping neighbors, as well as thousands across the country who continue to send money, supplies, well wishes, and prayers.

One generous Texas couple even donated the food they had purchased for their wedding’s welcome dinner. Dayna Skolkin and her fiancé, Josh Tillis, had to postpone their wedding until December because of Hurricane Harvey. But the bride-to-be didn’t stay blue for long. Instead, she jumped right in to help feed and care for those displaced by the destructive storm

“Everyone in Houston is doing everything they can to try to help,” Dayna said.

There are so many beautiful stories of everyday citizens helping each other in this time of crisis. Hopefully as the floodwaters recede, the kindness and compassion for our neighbors and fellow human beings continues.

Watch the video as featured on hit television show Inside Edition: http://www.insideedition.com/headlines/25307-hundreds-of-people-displaced-by-hurricane-harvey-fed-after-couple-postpones-wedding

Texas couple Dayna Skolkin and Josh Tillis had planned to hold a welcome dinner for friends and family before their Sunday wedding in Houston but instead, those gourmet meals went to hundreds of Hurricane Harvey victims.

The location of their dinner, which was scheduled for Friday, was the Aishel House, a Houston charity that provides housing and meals to patients getting treatment at the Texas Medical Center.

Skolkin said the charity is close to her heart because her mother, Holly Harwood Skolkin, who passed due to breast cancer, helped found it.

Dayna’s mother Holly Harwood Skolkin passed away five years ago, but is surely smiling at her daughter’s compassion and generosity for her neighbors and friends in need. HollyRoseRibbon.org – named after Dana’s mother Holly Harwood Skolkin also supports Aishel House, which helps cancer patients with transportation, food, housing, babysitting, and more.

So when they found out that the shelter had made the decision last week to use the food from their dinner to feed those displaced by Hurricane Harvey instead, they wasted no time stepping in to help prepare the food.

On Tuesday, after Hurricane Harvey had caused major flooding across the Houston area, Skolkin and Tollis showed up to volunteer.

“My fiancé and I went over there and helped to make the meals,” Skolkin told InsideEdition.com. “Everyone in Houston right now is doing everything we can to try to help. Once we were able to get out there and do something for the community, it felt really amazing.”

The meals consisted of breaded chicken, mashed potatoes, fresh rolls, and fresh vegetables, among other things that were scheduled for the couple’s three-course dinner.

It was delivered to hotels, the George R. Brown Convention Center, and various other places where people were in need of meals across the city.

Skolkin said she was glad the food was able to sustain people.

“We were very fortunate to fair so lucky in the storm but so many others weren’t. It was the obvious decision that we needed to get out and help,” said Skolkin. “It was therapeutic for us to get out of our own personal feelings of sadness to do something productive for the community.”

The couple, who met in college and got engaged last September, has postponed their wedding until December.

– as featured on INSIDE EDITION http://www.insideedition.com/headlines/25307-hundreds-of-people-displaced-by-hurricane-harvey-fed-after-couple-postpones-wedding